The complex is an easy walk from the Tower Hill Tube station.

Walk through History at the Tower of London

The Tower of London on the north bank of the River Thames began with the building of the White Tower by the Norman king, William the Conqueror in 1078. Later kings expended the original keep with defensive walls, a moat (now gone) and by building additional towers to serve as fortifications and royal living quarters.

The Tower is surrounded by both old and modern London and considering its history and location, it's a great place to begin a tour of the city. I was fortunate that I did not have to contend with huge crowds on the day I arrived. I opted for the audio tour so I could meander about on my own. It is definitely a place I would visit again.

A walk to the Tower complex from the Tower Hill Tube stop affords some wonderful views of the surrounding architecture.

The spire of All Hallows by the Tower, oldest church in the City of London.

All Hallows is within the City of London, a once fortified Roman area from which greater London grew. The Square Mile, as it is also called, does not include the Tower of London or Tower Bridge.

The spire of All Hallows is sometimes referred to as Samuel Pepys' tower. Pepys was a famous diarist who climbed the tower to witness and describe the great fire of 1666 while it consumed much of the city. All Hallows suffered heavy damage from hits during the Nazi blitz and restoration went on until the late 1950s.

A Tower Hill view of the 95-story Shard.

The 95-story Shard, the tallest building in Western Europe, was completed in 2012. The glass building houses restaurants, offices, apartments, hotel rooms and an open air deck on the 72nd floor. Tickets to the deck currently range from £25-£39, with the higher price including souvenir photos and a glass of champagne or a soft drink.

20 Fenchurch Street, also known as the 'Walkie-Talkie' building because of its unique shape.

My friend Rocky, who lives in London, reminded me of a news story I read in 2013 that reported how the curved shape of the building focused the rays of the sun like a huge solar furnace into a beam of such intensity that it melted car parts and interiors and caused fires in nearby buildings. A permanent sunshade was added to the building to solve these unfortunate architectural issues.

You might find the stories below amusing, unless you were the one who owned the melted Jaguar.

(Clicking on these will take you away from this site.)

Story: This London skyscraper can melt cars and set buildings on fire

Story: Car melting London skyscraper to be permanently cooled down

The Tower Bridge is right next to the Tower of London. It was built near the end of the 19th century.

The Thames and modern London, view from the Tower ramparts..

The images below will take you into the Tower, and before you leave, please consider leaving a comment.

Click any thumbnail to cycle through the Tower of London gallery. 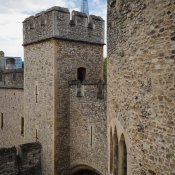 That was thrilling, Dan. I felt as though I could almost smell the different parts of the tower with all of it's storied history of horror and intrigue. That bright green and red tile floor is stunning. Love all the details - iron work and the wooden circular stairs and the armor. Thank you for putting this gallery together. I might lose sleep over the carved faces.

Amazing pics - and history lesson. Really enjoyed the Tower history but also the commentary about the contemporary city that now surrounds the Tower. And about those ravens - I remember hearing the odds are stacked in London’s favor: they will never leave because their wings have been clipped.

Thanks for the comments, everyone!

I take photos, come home and a week later can’t remember what was what! This is most impressive on many fronts. Thanks for sharing!

I had to look up addresses, dates, names, and historical facts. :-) I also photographed many of the placards so I would remember what was what, thought it was a pretty memorable place. :-)